On June 13th @ approximately 1 a.m., Brown County deputies deployed stop stick’s near US 36 HWY near Foxtail causing the suspect vehicle to come to a stop near US 36 and Goldfinch. The driver of the vehicle, Nathan Wagner 33 of Ashland, Nebraska was arrested on charges of Felony Possession of Stolen Property, Flee to Elude, Driving While Suspended or revoked and Reckless Driving as well as a probation violation warrant. No injuries were reported during the pursuit.

RICHARDSON COUNTY PRESS RELEASE
In the early morning hours of June 13th, 2022, Richardson County Deputies engaged in a vehicle pursuit. Speeds reached over 100 mph and ended in Brown County, KS.
Brown County Deputies, were able to spike the driver’s front tire successfully. Once the vehicle finally came to a stop, and the driver was taken into custody, deputies learned the vehicle had been stolen out of Lincoln, NE, on June 1st, 2022. The vehicle’s driver was identified as Nathan Wagner of Lincoln, NE. Mr. Wagner had multiple warrants for his arrest and was booked into the Brown County jail on felony charges.
Once Mr. Wagner is done with his Kansas charges, he will be extradited back to Nebraska, where he will face the following charges in Richardson County.
– Theft by Receiving Stolen Property
– Flight to Avoid Arrest
– Willful Reckless Driving
– Driving Revoked
– Driving Left of Center
– Fail to use Turn Signal
– Defective Vehicle Lighting
– Speeding 36mph +
–   Fictitious Plates
We would like to thank the Brown County Sheriff’s Office for their assistance. 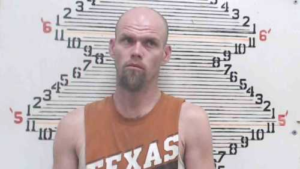