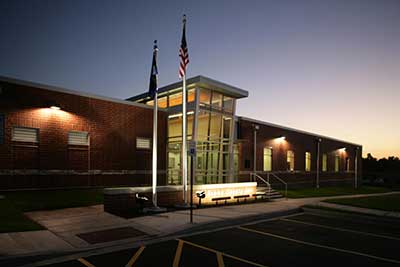 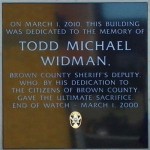 On March 1, 2012 the Brown County Commissioner signed Resolution 2010-11 dedicating the new Brown County jail in dedication of Todd Widman. Todd was a life long resident of Brown County and had decided to dedicate his life to law enforcement. Todd was well liked and respected by everyone.

TO THE MEMORY OF   TODD MICHAEL WIDMAN

The Brown County Commissioners dedicated the new Brown County Law Enforcement Center to the memory of Todd Michael Widman this morning at their weekly meeting.

Todd graduated from Hiawatha High School in May, 1997 where he was well liked and respected by fellow students and faculty alike.  Todd attended Cloud County Community College following graduation and was a Junior at Washburn University studing Criminal Justice at the time of his untimely death on March 1, 2000.

Todd dedicated himself to serving Brown County through his work as a Deputy with the Brown County Sheriff’s Office for over a year and half.  Todd made the ultimate sacrifice by law enforcement when he was tragically killed in the line of duty while assisting a troubled runaway observed wandering through the streets of Hiawatha, Kansas March 1, 2000.

I would like to inform the public we will be having Trick or Treat night at the Sheriff's office this year on October 28th from 5-8 p.m. We will have Trick-Or-Treat bags to hand out that contain safety information,pencils, stickers, candy, and glow sticks for safety....

END_OF_DOCUMENT_TOKEN_TO_BE_REPLACED

I would like to inform residents of an AMAZON scam that is circulating our area very heavily lately. Residents are being called repeatedly by an automated message stating someone had illegally charged an expensive item to their AMAZON account and to press #1 for more...

END_OF_DOCUMENT_TOKEN_TO_BE_REPLACED

I would like to make residents aware of another scam circulating our county. Residents are being called by someone representing themselves as BROWN COUNTY COURT SUMMONS SERVICES telling residents they have legal papers that will be served on them. Most have simply...