On 10-24-2021 at approximately 10:55 a.m., Brown County was alerted to a theft @ Wal-mart in Hiawatha with included a vehicle description involving 2 males and a female. A deputy who was on routine patrol located the vehicle southeast of Hiawatha and attempted the stop.

The vehicle refused to stop and led the deputy on a chase that ended near 290th @ Chalk Bluff Road, in Doniphon County when the vehicle stopped in a field and 2 occupants fled on foot. Speeds of 80-85 MPH on blacktop, gravel and dirt roads were noted. Doniphon County Sheriffs office, Kansas Highway Patrol, Iowa tribal Police assisted in the chase and in the location of the individuals. Due to inclimate weather, the two individuals were not located.

Brown County Sheriff’s office recovered the stolen property from the vehicle and with the help of the public, have potentially identified those involved in the incident. No injuries were reported.
The case is under currently under investigation.

On 11-24-2021 at approximately 2:30 p.m., deputies responded to K-20 HWY east of Everest on a report of a male individual appearing intoxicated, standing in the roadway waving a stick. Reports of motorists having to drive around the subject to avoid hitting him were documented. When a deputy arrived, the individual was located in the roadway with a large stick. The subject, Howard Cline 33 Horton was arrested on charges of Disorderly Conduct, Possession of Meth, Possession of Marijuana and Possession of Drug Paraphernalia. 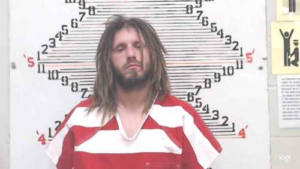