On 9-29-2014 as a part of the National Prescription Drug Take Back Day the DEA collected over 200 pounds of unwanted, expired, and/or unused prescription medication which had been turned in to the Brown County Sheriffs Office.

Even though the “National Day” has come and gone, we are reminding the public that they can come to the Sheriffs office at any time to turn in unwanted medications and we encourage everyone to do so. This program has been well received and we appreciate all of the public support.

Over the past four years, the U.S. Drug Enforcement Administration (DEA) has spearheaded this initiative and has held seven previous Take-Back Days, which are authorized by the Secure and Responsible Drug Disposal Act of 2010. As a result, the federal agency has collected more than 780,000 pounds of old, unwanted or unused pills.

But why not toss them in the trash? For a number of reasons.

Unused and expired prescription drugs sitting in medicine cabinets and kitchen drawers everywhere adds to the growing problems of accidental poisoning in children, drug addiction and overdose, as well as illegal possession and sales of controlled substances. Additionally, chucking that old bottle of pills in your garbage can is unsafe for the environment. The chemicals — both active and non-active — end up in our country’s landfills and water supply. 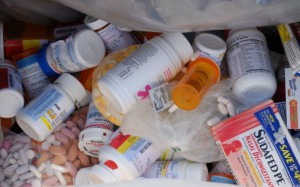